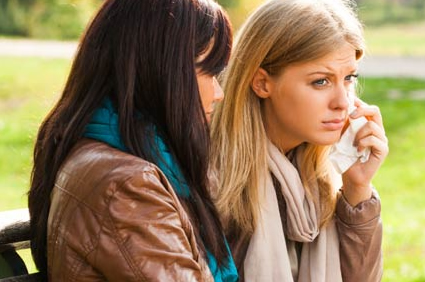 Someone you know or care about is experiencing domestic abuse: they may have told you directly, you may have witnessed it or you have strong grounds to believe they are in that situation. If you want to direct a friend to Sonas we and other services are here to help.

It is important to remember that domestic abuse differs from a “bad relationship”. In a normal relationship or even one going badly or ending – neither individual fears the other or is controlled by the other. Domestic abuse doesn’t always have to mean physical violence but it can be part of the abuse.

Domestic abuse is fundamentally the control of one partner over the other. Domestic abuse doesn’t have to involve physical violence although it can be part of it; it usually involves a mix of following: emotional, verbal, financial – denial or control over necessities, sexual and physical abuse. Exposing children to domestic abuse is the emotional abuse of children – even if they are not the direct targets of the abuse.

Domestic abuse doesn’t have to happen all the time which can make it even more confusing especially for victims – abuse tends to be cyclical increasing in severity and frequency. There can be periods of calm, where the abuse feels secure in their control of their partner and the situation, followed by a build-up towards an abusive episode, which again may result in apologies and promises to change by the abuser. Many survivors say it was those periods that made them stay in the relationship; in reality these periods are just part of a manipulative control cycle.

Signs a woman may be experiencing domestic abuse…

How to approach someone you care about…

Your response can make a big difference and though it may be hard to avoid telling someone what to do, right now they need to know you believe them, don’t blame them and aren’t going to minimise their experiences. The following could help:

Any cookies that may not be particularly necessary for the website to function and is used specifically to collect user personal data via analytics, ads, other embedded contents are termed as non-necessary cookies. It is mandatory to procure user consent prior to running these cookies on your website.

Analytical cookies are used to understand how visitors interact with the website. These cookies help provide information on metrics the number of visitors, bounce rate, traffic source, etc.

Performance cookies are used to understand and analyze the key performance indexes of the website which helps in delivering a better user experience for the visitors.

Accept all Save & Accept
×

WhatsApp Chat is free, download and try it now here!

× How can I help you?
Safety Exit